Carlos Heras-Palou qualified from the School of Medicine in Zaragoza (Spain) in 1988. Following House Officer and SHO jobs in England he obtained his FRCS in 1993 and completed his training in Orthopaedic Surgery and Trauma in Leicester obtaining his FRCS (Tr & Orth) in the year 2000. He trained in Hand Surgery in Leicester, followed by fellowships in Derby and Oxford. In 2001 he was fortunate enough to enjoy the Pulvertaft Fellowship awarded by the BSSH, and spent 6 months at St James’ Hospital in Leeds. He Joined the Pulvertaft Hand Centre in 2001 as a consultant with an interest in hand and wrist surgery.

Mr Heras-Palou runs a dedicated wrist clinic on Monday afternoons at the Royal Derby Hospital. Areas of particular interest include scaphoid fractures and non-unions, wrist pain, wrist instability and problems after distal radius fractures. Mr Heras-Palou co-chairs the Derby Wrist Course, together with Dr Marc Garcia-Elias, and is a regular speaker in hand and wrist fracture courses, and part of the faculty at the Hand and Wrist AO Courses.

Mr Heras-Palou can be contacted at the Royal Derby Hospital via his secretary, Lara Chambers, on Derby (01332) 783388; [email protected] regarding NHS appointments or for private practice appointments – Cheryl Jones: 07958-612802. 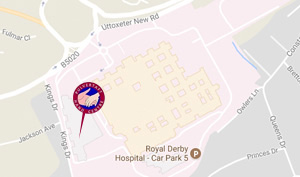